I've found a new Joe Morgan who's so good at Joe Morgan-ing someday he may even out-Joe Morgan Joe Morgan! Can you tell I'm excited?!

Here's an article entitled "The way you should play"! Take it away, Rob!

The way you should play

Tuesday, June 14
Having watched St Louis Cardinals shortstop and leadoff hitter David Eckstein now for four-plus years, he is easily one of my favorite players. He may not be able to hit like Albert Pujols, or go get fly balls like Jim Edmonds or catch and throw like Scott Rolen, but if you took all of them and squeezed them together, you would come out with a player like David Eckstein.

> Whoa, whoa, slow down, Rob! You just said Eckstein can't hit or field or catch or throw! And yet you also say he is the ultimate super-player who can do all of those things! Which is it?!

Sure he's small, and doesn't have home-run power, but last year in the AL, he was the second-hardest player to strike out, doing it just 49 times in 566 at bats.

Now David may not make All-Star teams, although he has a great chance with his manager Tony LaRussa coaching this year's All-Star squad from the NL, but he is one of the best all-around players in the game today.

> Surprise, Rob! Your little secret is STARTING the All-Star Game! One of the best all-around players in the game today?! You're crazy!

He does everything the way the game should be played, and the other players may get you to the playoffs, but the David Ecksteins bring home the championships.

> That is totally unfounded!

If you want to teach your kid how to play baseball, tell him to play like David Eckstein.

And now a picture of our new hero! Doesn't he look cool?! 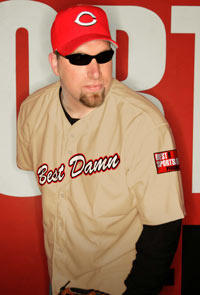 Comments:
If there were a city in America called "Best Damn," and they had a baseball team, what would their uniforms look like?