I'm pretty happy that a Google search for

spits back FJM as the second result.

Anyway, does anyone believe Rogers' explanation for that brown, shit-like shit on his hand?

"It was a big clump of dirt," Rogers said after the game. "I didn't know it was there. They told me about [sic], but it was no big deal."

First off, it didn't look like dirt. I wish I had a screencap on hand.

Within seconds, I was sent a couple of different shots. Here's one: 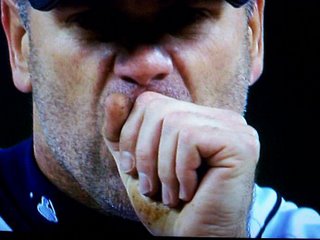 Actually, it's pretty hard to tell what it is. Whatever it is, it's poopy-looking.

Second, you didn't know it was there? You didn't realize the hand you use to pitch the baseball was covered in dirt? Listen, Kenny, I wasn't born on a strawberry farm like you were.

When asked how he could have a big clump of dirt on his hand, Rogers replied, "It was dirt and rosin put together. That's what happens when you rub it up. … I just went and wiped if off. I didn't think it was an issue. After the first inning, it was fine. I felt I was pretty comfortable after that."

Tomorrow, I'm buying a big bag of rosin and a big bag of dirt, mixing them up together, rubbing the resulting mixture on my left hand, putting on a full Tigers uniform and photographing my left hand as I simulate a changeup. Then we'll see if that's what happens when you rub it up!

How much do you think a bag of dirt costs?

After the substance was noticed, ESPN reviewed tapes of Rogers' pitching performances earlier in the postseason. The tapes revealed that, in starts against both the Yankees and Athletics, a similar-looking brown substance was spotted on Rogers' hand.

You're kidding. Do you think maybe you could show us those pictures, ESPN? No, you're good? Okay, cool. You just go on ahead there and keeping worldwidely leading sports worldwide.

And they've added pictures! Congratulations. Karl Ravech is still sticking with MLB's story that it was dirt on SportsCenter right now.

Comments:
Also, God help me: John Kruk is making the very valid point that there is no way Kenny Rogers didn't know what was on his own pitching hand.