Heaven Is Reading This HatGuy Column

In FJM Heaven, every writer complains that high-OBP sluggers clog up the basepaths. In FJM Heaven, every article trumpets David Eckstein as an MVP candidate based on his grit, his heart, and the fact that he sleeps in a child's race car bed. In FJM Heaven, A-Rod is a worthless choker, wins matter more than WHIP, "it's not called the Hall of Very Good," and all bloggers live in their mothers' basements.

And in FJM Heaven, HatGuy writes about food for an entire column, every column.

No more candy cane lane? Say it ain't so, Joe!
Yankees manager goes too far by banning goodies in the clubhouse

This is just a delight. I mean, I'm not even going to be an asshole for this one. Okay, maybe a little.

were playing for the Yankees in 2008 instead of the underdog Scottish Nationalists in 1305, he’d have climbed on a table in the Yankees clubhouse and delivered a line that would resonate through time: “You can take my life, but you can’t take my Reese's peanut butter cups!”

All of you readers who e-mail me to add the "food metaphors" label on every single post I write, this post is for you. You are legion, you are persistent, and I appreciate every e-mail.

HatGuy, Jesus...he's not even veiling his gustatory fascination with the aforementioned food metaphors anymore. This baseball column is just straight up about food. Think about that. Also, countdown until he mentions ice cream. 5...4...3...

Alas, there is no William Wallace on the Yankees and no plans for Mel Gibson to play the brave rebel who leads the team against manager Joe Girardi, who has imposed a reign of health food on his team.

No Mel Gibson joke? You disappoint me, HatGuy. Hell, "sugar tits" even has a food in it. You definitely could have awkwardly shoehorned a dated, unfunny Gibson reference in there. Next time.

No candy in the clubhouse, Girardi has decreed. And no ice cream.

There it is. For the uninitiated, I refer you to what reader Zac once wrote us:

"If anything else happens — the fans cheering wildly or the commentators congratulating them for booing boisterously or no one taking notice of the occasion at all...[I'd] be as disappointed as I’d be if I set out to construct a hot fudge sundae and discovered I was out of whipped cream."

"It’s hard to make panic seem banal, but that’s what the Yankees have accomplished over the years... [blahblah] ...Panic should be saved for special occasions. For the Yankees, a day without panic is like a hot fudge sundae without whipped cream."

Yes, HatGuy -- we keep track of food metaphors and similes you made nearly two years ago. That is the kind of people we are. Food metaphor enthusiasts.

It’s not just at Yankee Stadium, either. By Girardi’s orders, stadiums the Yankees will visit this year have been asked not to provide M&Ms, Dove bars, or any other sweet succulence to his Yankees.

Instead, Girardi wants granola, nuts and dried fruits for his players to snack on. My guess is there won’t even be salt on the nuts.

It makes you wonder why he doesn’t go all the way and ban apple pie and motherhood.

Because he wants his players not to eat junk food? Multi-million-dollar athletes whose bodies are finely-tuned machines designed to perform extraordinary physical tasks on an everyday basis? Yes, this man is Stalin because he doesn't want his players looking like this: 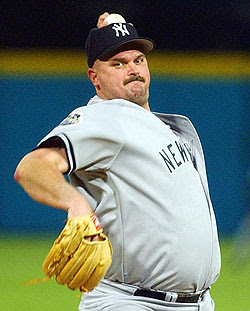 I understand his motivation — promoting healthy choices in all things. But no chocolate? No nougat and caramel? No Heath bars? Not even a roll of LifeSavers?

How many times do you think HatGuy stopped to eat something while writing this column? Fifteen? Twenty? I'm guessing he ate at least one of each and every food he mentions.

Well, to be fair, you were the one who brought up the peanut butter cup.

It wasn’t that long ago — within the past 20 years — that baseball clubhouses were among the last refuges from a world that was becoming obsessed with inflicting “healthy” living on everyone — by law if necessary.

Yes, 'twas a fine time. The baseball men would laze about, drunk on molasses moonshine, cheeks puffed with tobacco crabgrass. No coloreds were allowed, and the only women were the Lace Tutu Girls, whose sole purpose was to light your cigar and freshen your martini -- toplessly, of course. Ah, 1988.

Once upon a time, players arriving for work could load up on free chewing and spit tobacco to get the nicotine that kept their engines running.

People say a lot of things about baseball. But one thing I think just doesn't get enough play is that it doesn't have enough mouth cancer.

Next to the tobacco was a rack of gum and candy. Coffee urns dispensed a brew so strong you felt you could slice it and eat it in a sandwich.

Out of sight from the public but no less readily available were amphetamines — “greenies” — for those who needed to kick-start their games.

So you're pro-greenies? What? I'm lost.

When their work was done, the tired heroes foraged through a postgame buffet that included at least three items from the all-important grease food group. Coolers harbored all manner of soda pop and enough beer in the players’ favorite brands — Free and Free Lite — to get a fraternity house through rush week.

Yeah. That's partly why I bet a team of modern players would kick these lard-assy gentlemanly layabouts' asses. Just a guess.

Except Wade Boggs. Dude would drink 70 beers on a cross-country flight and still go 3 for 5.

It wasn’t something that the American Heart Association (or your mom) was going to endorse, but when you threw in the magazine collection — heavy on hunting, cars and women who had forgotten to bring their clothing to their photo shoots – it wasn’t surprising that ballplayers liked to get to the park early and stay later than absolutely necessary. Clubhouse life was as good as it got.

And then the health police started getting involved.

I think HatGuy is confused. You can still eat all of these things. Relax. Breathe deeply. Look in your pantry. They're still there. All of them: the Three Musketeers, the Butterfingers, the Snickers, the Milky Way Darks. Now look in your freezer. See the ice cream? Yep, it's still there. Hey, here's an idea: what if you crumbled up some of those candy bars on top of the ice cream? That's good, isn't it?

Now isn't that more fun than writing a column about there being no chocolate in the Yankees' clubhouse? Aw, he fell asleep. The little HatGuy's all tuckered out. Isn't that cute?

The first thing to go was free tobacco for reasons that should be obvious. Then teams started to get more healthy choices in the buffets. In some clubhouses the beer also disappeared.

There were good reasons for all of the decisions. Tobacco can kill you, and so can excesses of grease.

Or chocolate. Or -- gasp -- hot fudge sundaes with whipped cream. It's all fun and games when you're just making metaphors about sundaes, but when those metaphors become reality, it's your arteries that pay.

And if a player were to get drunk in the clubhouse and then get in an accident, the team could face heavy liability.

Or if a Hall of Fame-bound manager were to get drunk and then drive his SUV out into the middle of an intersection and fall asleep at the wheel, I guess that would be a pretty huge deal, right? Oh, wait -- it turns out no one cares.

But there’s got to be a limit to this.

It’s not as if modern ballplayers are Babe Ruth wannabes who train on hot dogs, beer, cigars and babes. (Well, maybe the babes, but not the other things.) These guys work out year-round and many have nutritionists and trainers at their beck and call.

So they probably don't care that much about not scarfing down Turtles for three hours straight before the game.

Sure, you’ve got your C.C. Sabathias carrying on the weighty tradition of David Wells and other noted gourmands, but for the most part, these guys are as healthy and fit as anyone could ever want to be.

Also, not really sure how fit Joba Chamberlain is. Maybe he's like the Kingpin and it's all solid muscle.

A Dove bar or a bag of M&Ms is not going to hurt them, and it just might make them feel better — and therefore perform better.

Oh, I get it. It's neither. It's that Chocolate Makes People Better At Things! You think the chocolate lobby has gotten to HatGuy? Look, we've all been tempted by the money Big Chocolate throws at us, but I've always thought of HatGuy has an incorruptible lone kook-type.

Chocolate can, in fact, be very good for you. Dark chocolate is full of anti-oxidants and contains a chemical that elevates your mood.

Yarrrgggh!!! Corporate synergy -- they wrote chocolate into the storyline!

This is well-known at Hogwarts School of Witchcraft and Wizardry, where Harry Potter and his posse frequently were ordered to eat lots of chocolate to help them heal after a busy day battling Dementors.

Best part of an already unbelievable gold mine (of gold chocolate coins) of an article.

Some would argue it’s the best food nature ever contributed to our diet, a food loaded with anti-oxidants and imbued with a mood-elevating substance called theobromine, from which comes cacao’s scientific name — theobroma, the “food of the gods.” Was ever any product of nature more aptly named?

Holy f-ing s. He's really lost it, hasn't he? I'm worried. I'm honestly, no-kidding, 100% worried about Michael Celizic's mental state. Call me, Mike. Well, no. Don't do that. Just write an article about A-Rod faking his injury so he can avoid those high-pressure May at bats so I know everything's all right.

And now, just for the fun of it, I will now list each and every food (including repeats) or other consumptible (I made that word up to mean something you put in your body in a food-like manner) found in the column:

Thanks to Ethan for tipping us off to this article. The world is a richer, creamier place for its existence.