Buzz Bissinger Is Great At Apologizing

But before you click on that link, before you do anything, in fact, let me introduce you to the funniest thing I've seen in about fifteen years (probably some peak-era episode of "Seinfeld," I don't know). The link directs you to a pretty good piece in the Boston Phoenix about the tension between old-line sportswriters (that's them!) and new-fangled bloggers (that's us!)

Accompanying the article is the best, most accurate piece of artwork on any subject ever.

Seriously, I'm not fucking around. Prepare your eyeballs for its majesty. 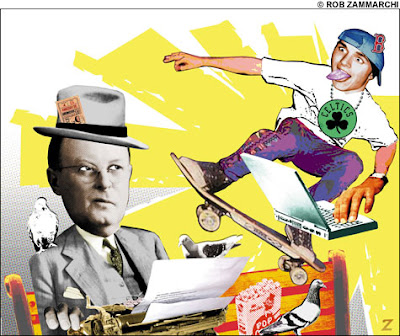 Now, I don't know if this "Rob Zammarchi" character has a camera in my fucking bedroom or what, but that is a creepily precise, photorealistic representation of exactly what I look like and exactly what I'm doing right now. How did he do that? The skateboard, the purple jeans, the Chucks, the beaded necklace, the KRAZY Red Sox cap, the waggling tongue, the psycho-killer eyes -- THIS IS WHAT I DO WHEN I BLOG!

And the depiction of the sportswriter, from what I understand of the species, is even more accurate. It appears to be John Clayton hammering away on an Underwood while pigeons shit all over him. You know -- sportswriting. Old school-style.

On to our friend Buzz. As you'll recall, the man exhibited a passionate, borderline psychotic contempt for the medium of blogging, and expressed this contempt via a verbal bludgeoning of Mr. Will Leitch of Deadspin on Sir Robert Costas' program CostasNow (say it real fast, like one word -- it's more fun that way). Now, he's contrite:

"Will Leitch was just treated with disrespect."

BY YOU. By you, sir. He was treated with disrespect by you, a man accusing him of treating the honorable Matt Leinart with disrespect. You were defending Matt Leinart's honor, and you yelled and screamed and I'm guessing employed every iota of your self-restraint in order not to punch this how-dare-he-malign-Matt-Leinart kid.

"You shouldn’t say to someone off the bat that they’re ‘full of shit.’”

No, you shouldn't. This is, it would seem, in the parlance of the Bloggy Uncouthosphere, "Day One Shit."

I'm happy that he actually had to say those words and mean them. He is a grown man with grown children.

“There are some very good blogs dedicated to single subjects,” he acknowledges;

"There are some very good books dedicated to Bass Fishing Instruction," he acknowledges; "the rest are pretty much crap."

"Not knocking books -- they're just a limited medium, you know?"

"They’re very informational. Their goal isn’t to play a snarky game of gotcha, or to be malicious and cruel."

Or firing a nice old grandpa who happens to be one of the greatest second basemen to ever play the game of besoboru. "Snarky game of gotcha" describes this sad little corner of the Interworld pretty accurately, I suppose, but you know, why can't you be malicious and cruel and a tiny, tiny bit informational as well?

Nah. Let's just stick with being cruel. If I could use one word to describe my personality, it would definitely be "cruel."

Now pull your shorts up -- it's about to get cranky in here.

Can we go back and rename this site InteractiveGangbang.com? Mr. Bissinger, let's not pretend snark and gossip and juice are foreign phenomena of the 21st century digital-gangbang age.

You think if people woulda found daguerreotypes of Gentleman Jim Corbett servicing an Appaloosa, William Randolph Hearst wouldn't have published that shit in one of his yellow-ass rags, like, post-haste? (Forget for one second that daguerreotypes had long since been replaced by ambrotypes and tintypes, I just like the word daguerreotypes, okay?)

The point is, Bissinger has one last thing to say, and it's the craziest thing of all:

“You have blogs that proudly parade around saying, ‘We don’t need no stinking credibility or stinking information — it doesn’t matter what you say or do if you know how to write.’ They cover themselves under the mantle of the First Amendment. But if John Adams and Thomas Jefferson had any idea what the First Amendment would have wrought, they would have canceled it.”

I am pleased -- no, ecstatic -- no, extraordinarily proud -- that the David-Eckstein-uses-a-three-inch-candy-cane-as-a-bat jokes I write at this very site would, in theory even, compel John Adams and Thomas Jefferson to rewrite the motherfucking Bill of Rights.

That was always the point of this site anyway. To destroy America.

Comments:
This is beautiful. Some eight minutes after publishing this post, I get this e-mail from RudyKelly:

I'm pretty sure John Adams tried to get rid of that whole pesky 1st Amendment thing with the Alien & Sedition Acts and he got his ass rightfully handed to him.

Of course. Of course! Google it. Adams totally pushed that unconstitutional bullshit through. Jefferson contested it on First and Tenth Amendment grounds, and eventually the Sedition Act expired before it was challenged in court.

Thank you to Paul, James, and Yuri (whose text follows) for more historical fun:

Neither Thomas Jefferson nor John Adams had anything to do with the
writing of or voting for the Bill of Rights. The Bill of Rights was
principally authored by James Madison and ratified in 1791 when
Jefferson was Secretary of State and Adams Vice-President.