A Message From Juan Pierre 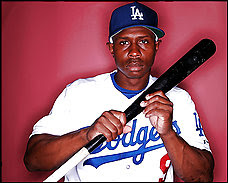 Seriously, it's me. Juan P. John Peter. J.P. Non-Ricciardi. The FJM guys like to crack on me, but it's all in good fun. We're actually buds. Junior lent me his Blogger login (blogin?) and password and told me to go nuts, so here I am. The thing is, I think it's fine for people to enjoy watching me run fast on the basepaths and hit a lot of weak infield dribblers. I understand that it's exciting to see a man attempt to steal a base, and so does Junior. You can like my style. Just don't think I'm good. Because I'm not.

Take, for instance, Mr. Tim Brown. Tim writes for Yahoo! Sports and he likes me. That's cool, Tim. Tim also has a persecution complex because he thinks people don't like him because he likes me. I'm here to say it's all right, Tim. It's all right if I'm the "Juan" that you want. (Get it? Grease.) It's okay if you sing the U2 song "One" but replace the word "one" with the word "Juan." It's fine if you like scrappy speedy gritty hustly men. Just don't think they're especially effective, especially if they OBP in the .200s and slug .00014.

LOS ANGELES – Every afternoon it is was as new as it was going to be, this baseball thing, life in L.A., in Dodger Stadium, surrounded by people who believed he's not very good at this.

And every night it was as good as it was going to be, baseball in L.A. at Dodger Stadium, surrounded by people now sure he's not very good at this.

Juan Pierre is not a good leadoff hitter, capable center fielder or wise investment. He's not a winner.

That is what they are sure of.

Tim, the thing is ... when you write an intro like this, usually the implication is that the fans are wrong. But um, they're sort of right. Right now I am not a good leadoff hitter. I'm probably just an okay center fielder. And I'm almost certainly not a wise investment. And I never have been. Again, it's okay if you like watching me run fast. That's still cool. With me?

Yet every team he has played for has made him the leadoff hitter, the center fielder, and paid him plenty of money to do it. When he led off and played center field for the 2003 Florida Marlins, they won a World Series and he was 10th in the MVP vote. That was then.

Right. Well. You're right. 2003 was fun. One of my better years, actually. Proud of that .361 OBP (it's down to .312 this year, whoops!) And hey, 10th in the MVP voting, wow! Even I forgot about that. But Tim, did you know that of the eight regular position players that year, I finished seventh in OPS+? Behind even Juan Encarnacion and Alex Gonzalez? I know this, Tim. Because I was there.

And when I told a scout I still wanted to like Juan Pierre the player, he told me, "Don't."

Which scout was this, Tim? Was it Willie B.? It was Razormouth, wasn't it? Backwards-arm? Ebenezer. Aunt Charlene? Zohlflan. Hephaestus?

Anyway, the point is, all of those scouts agree I am a terrible baseball player.

When I told him I couldn't dismiss a player who worked longer, cared more, played harder than all but a handful of others in the league, he said, "Seriously, don't."

Apparently, we don't like Juan Pierre anymore. He doesn't hit for power and he doesn't get on base. He takes odd routes in the outfield and, when he and the Dodgers are lucky, covers the mistakes with speed. He throws poorly. He does steal bases and he does hit singles.

Yes! Yes. Great paragraph, Tim. Wow. Phenomenal. If I were a nut, that would be a great shell for me. Kudos.

Ha ha! Sweet. I just bought a Maserati and drove it into the harbor. Hey, a dolphin!

I just bought the dolphin and rode it to shore.

I don't care. I like to watch him play. I like him on base, when he is. I like his first seven years after the All-Star break, when he's batted .318, when his on-base percentage is .361. I like a player who runs hard, no matter what, every time.

You hear that? That is exactly the argument for people who like me. Call it the Credo of the Juan Pierre Fan Club. It is this: "I don't care if he's good, bad, or very very bad. I like him anyway." Totally, totally defensible.

It's like saying, hey, I don't care if Allen Iverson shoots 27% next year -- I like how it looks when those 27% of his shots do go in. He's exciting. He's little. He has cool hair.

If you want to like me, or D-Eck, or D-Erst, or whoever, you can! Again, just don't make the argument that we're actually valuable. It's purely aesthetic. Admit it.

I don't care who pays him or how much they pay him, not when he's on first, and El Duque can't unravel fast enough to help Paul Lo Duca in the least.

I bet Dodger fans will care in 2011 when I'm just eating up the payroll! (Sorry, Dodger fans!)

He won't apologize for his game, because it's every bit of what he's got. The Dodgers wanted him. Here he is. All of him. Every day.

"I know I have limitations," he says.

That quote is taken OUT OF CONTEXT. The full quote is "I am Juan Pierre and I know I have limitations, including hitting, hitting for power, walking, taking good routes, throwing, getting on base in general, baseball, most racquet sports, softball, T-ball, and Australian rules baseball. I am fast, and if you like me because of that, God bless you. Now if you'll excuse me, I have to go buy every seat in the theater for the next showing of Mr. Brooks. I make a lot of money, and I am a big Kevin Costner fan. I am Juan Pierre."

That's all for this edition of PierreBlog. Thanks to Junior for letting me post!

Comments:
Tim Brown: all he does is (a) score touchdowns and (b) write stupid things about Juan Pierre.

Shit. I blew it. As JJD points out, "All he does is score touchdowns" is Cris Carter.

Tim Brown: all he does is (a) set a Notre Dame record with 1,937 all-purpose yards in his junior year and (b) write stupid things about Juan Pierre.

Not as catchy. But factually accurate.

I like the implication that "all Cris Carter does is score touchdowns" is also factually accurate.